An EEG arousal is an abrupt shift in EEG frequency, which may include alpha and/or theta waves and/or delta waves and/or frequencies greater than 16 Hz lasting at least 3 s., and starting after at least 10 continuous seconds of sleep. (ArFigures 1a and 1b) 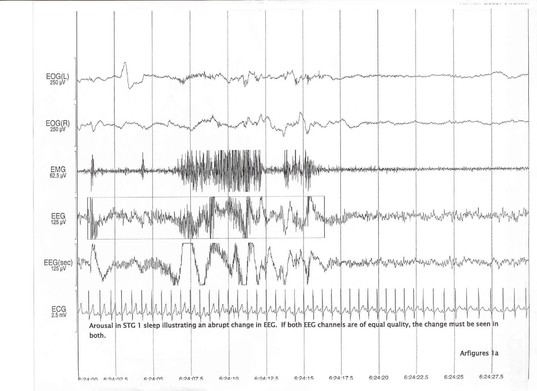 Artifacts, K complexes and delta waves are included in meeting the 3 s. duration criteria only when they occur within the EEG frequency shift (change in frequency must be visible before these waveforms). A "K" complex or spindle occurring immediately prior to the EEG shift or following is not included in the arousal duration. (ArFigures 2a, 2b, 2c and 2d) 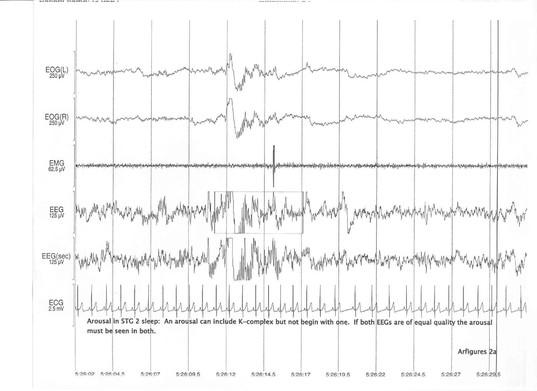 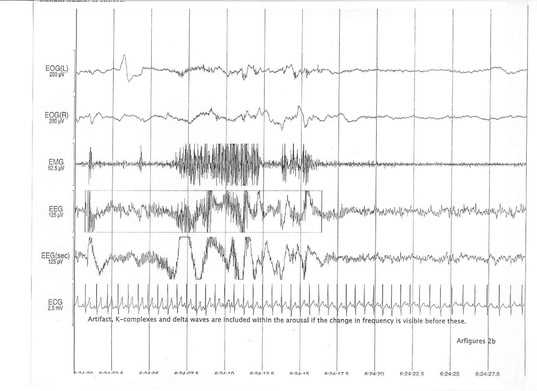 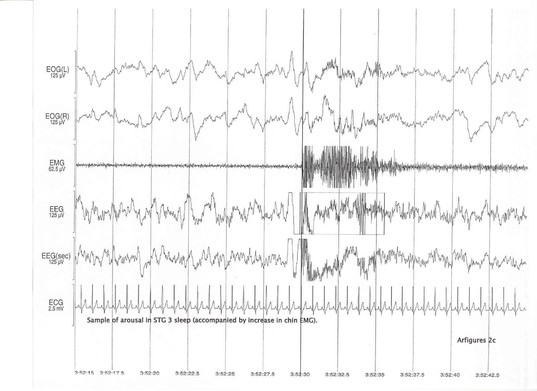 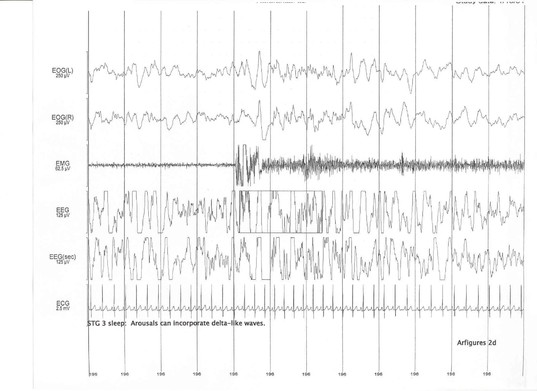 Parts of the EEG totally obscured by EMG artifact are considered an arousal if the change in background EEG in addition to the area obscured by EMG is at least > 3 sec. (ArFigure 2e) 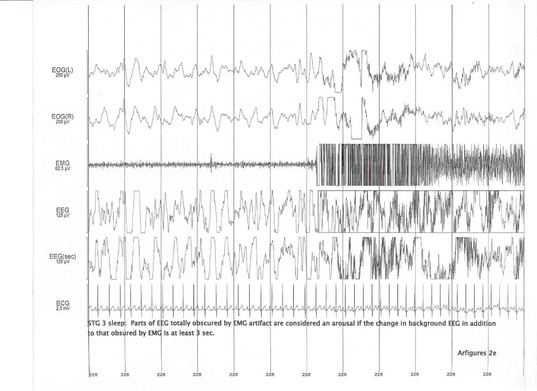 If both central EEGs are equivalent and interpretable, the arousal (EEG frequency shift) must be observed in both channels. If observed in only one of two equivalent channels, the change in EEG is assumed to be artifact and not an arousal.

Arousals lasting > 15 s. and containing awake EEG within an epoch cause the epoch to be classified as AWAKE.

ArFigure 3a - Increase in EEG frequency from EMG artifact 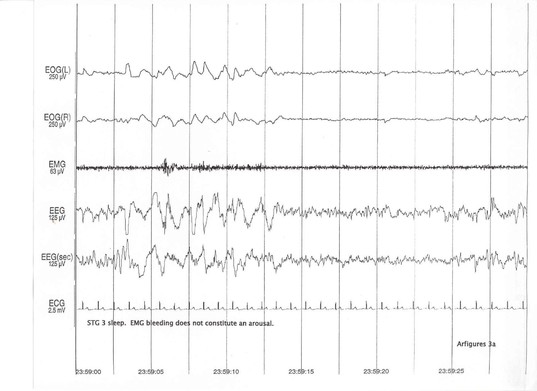 ArFigure 3b - Increase in EEG frequency from EMG artifact 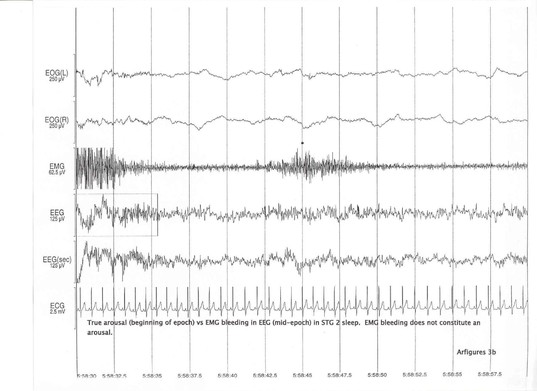 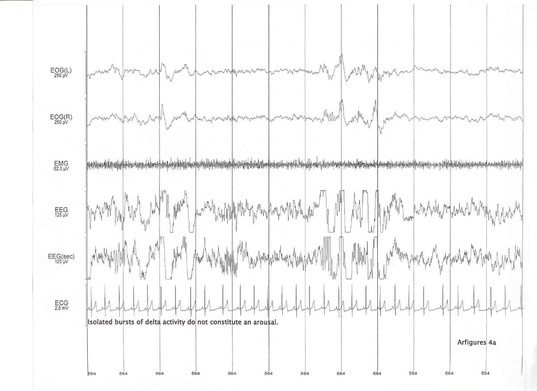 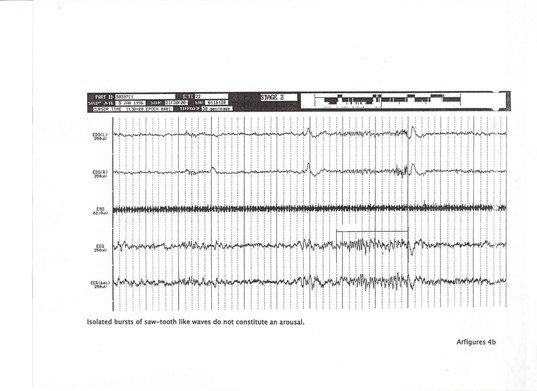 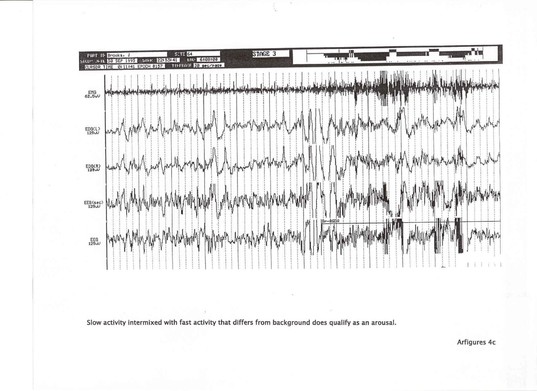 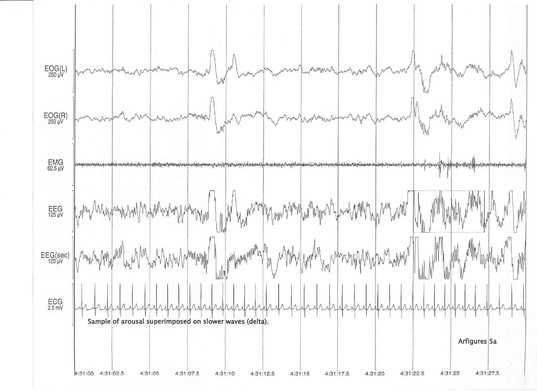 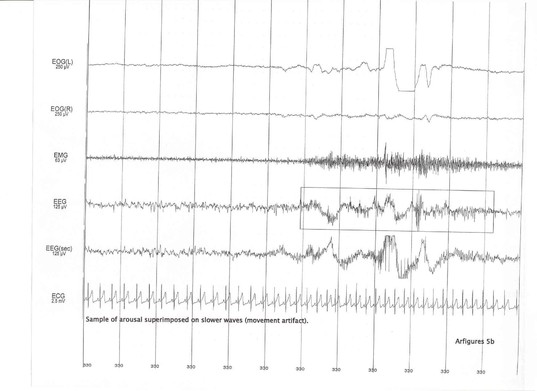 In stage REM, an EEG frequency shift must be accompanied by a simultaneous increase in amplitude of the chin EMG (lasting over 0.5 s.). An arousal starts when a definite change in background EEG is visualized. The increase in the chin EMG can occur anytime during the arousal (can be at the end) and is not a marker for the beginning of the arousal. However, increased EMG activity without a change in background EEG does not constitute an arousal (ArFigures 6a, 6b and 6c). 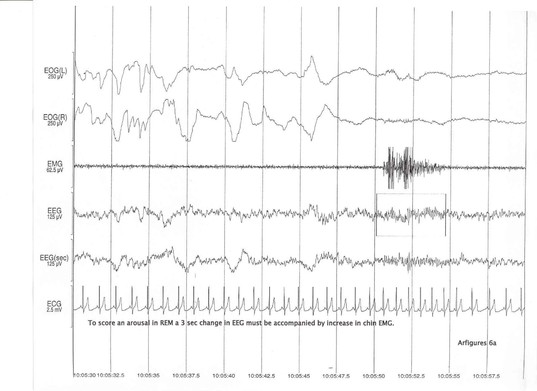 TIPS for Arousals in REM:

Some studies with high RDIs have many arousals that may appear to last > 15 sec. within given epochs. If all such epochs were classified as AWAKE, then the respiratory events would not be included in the RDI and the RDI will be underestimated. When faced with this situation, the scorer may attempt to keep the duration of the arousal to as short as feasible (e.g., corresponding to the length of the waking EEG in that epoch). This will maximize the number of epochs containing arousals that are captured as "sleep".

6.6.2.2 Sleep onset Table of Contents 6.6.2.4 Rules for assigning sleep stages when arousal is present in the epoch